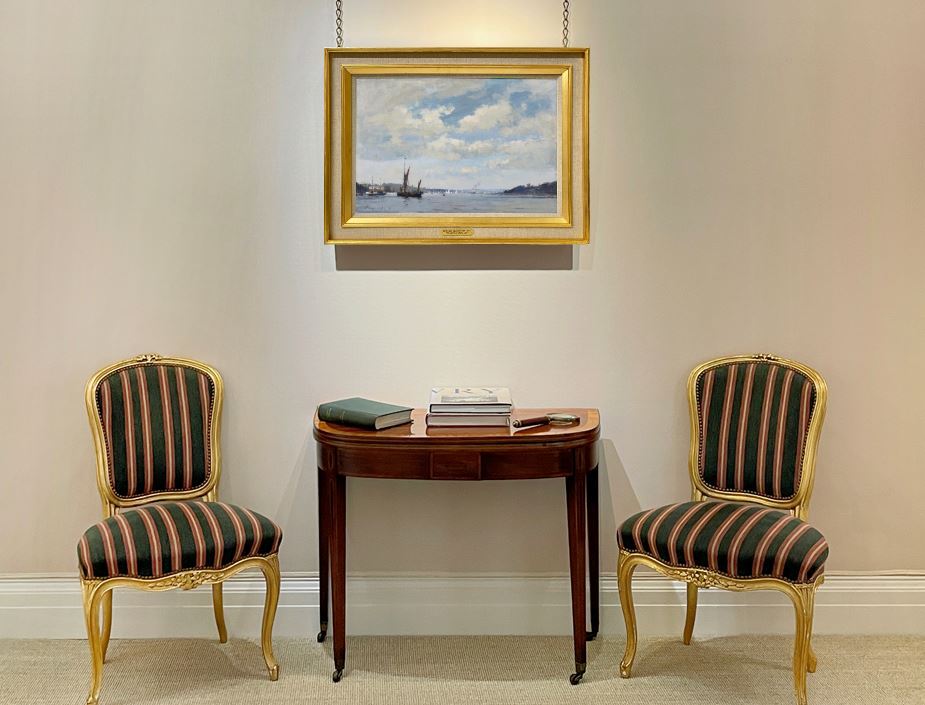 Edward Seago was a uniquely British artist, a landscape painter in the great tradition of John Constable, a fellow East Anglian, who achieved Royal Patronage widespread acclaim and popularity in his lifetime.

Seago was born in Norwich in 1910 and it is his depiction of the landscape, skies and shoreline of East Anglia for which he was to become so widely known. Although largely self taught he was encouraged and mentored by Bertram Priestman RA, and by Sir Alfred Munnings himself a landscape painter in the Constable tradition. The paintings of John Crome and James Stark and the Nineteenth Century Norwich School with their portrayal of the extensive landscape transformed in moments under the ever changing skies were a significant influence. Dutch Seventeenth Century painters Meindert Hobbema and Jacob van Ruisdael were an inspiration with their portrayal of the flat landscape of the Netherlands with the low horizon and monumental skies, while Seago was also an admirer of Philip Wilson Steer and John Arnesby Brown. The coast and rivers of East Anglia were of huge personal interest to Seago, he sailed his ketch Endeavour and subsequently his green hulled yacht Capricorn on the Orwell and around the coast and estuaries and further afield to the coast and rivers of France and the Low Countries.

A sociable and well connected figure, Seago visited Venice in the 1930’s with the second Lord Melchett, and was very much at home with his aristocratic, and latterly Royal patrons, as he was with members of the Ipswich Art club and Norwich Art Circle. Following the Second World War in which he served in the Royal Engineers and as an unofficial war artist in Italy, where he met King George VI Seago befriended a number of members of the Royal Family, as friends and patrons, including Queen Mary; Queen Elizabeth II, the Queen Mother, both of whom he painted and the Duke of Edinburgh and Prince Charles. It was the Duke of Edinburgh who invited Seago in 1956 to join him on a world tour on the Royal Yacht Britannia which led them to paint in Antarctica, South Georgia and West Africa, and which led to a continuing friendship. In 1957 an exhibition of his paintings from this tour was held at St James’s Palace. 1962 saw Seago in Hong Kong, John Swire, of the eponymous multinational shipping group, already a collector of Seago’s work, invited the artist to Hong Kong to paint a series of coastal landscapes and city scenes for the new boardroom, Seago stayed for six weeks and painted further works in oil and watercolour on his own account .

Seago’s commercial success was in part due to the highly successful relationship that he formed with the dealer PD Colnaghi in 1945, queues would form overnight for his openings with the opportunity to purchase his new works. In time, clients were allotted a number and rationed to just the one painting such was his popularity and success. Seago latterly moved to Marlborough Fine Art, a hothouse for modern painters, who also represented Francis Bacon.

Seago travelled widely, his subjects ranging from France, Portugal and the Low Countries to the Mediterranean, Africa, Hong Kong and as distant as Antarctica. However it was to East Anglia that he always returned. Edward Seago’s paintings epitomise the Norfolk and Suffolk landscape and coastline that was so close to his heart, he lived in the depths of Norfolk at Ludham on the Broads, appropriately, given his affinity with Dutch landscape painting, in ‘The Dutch House’. He captured the ethereal nature of the landscape, the mood and movement and the transformation brought about under the constantly changing and shifting monumental skies.