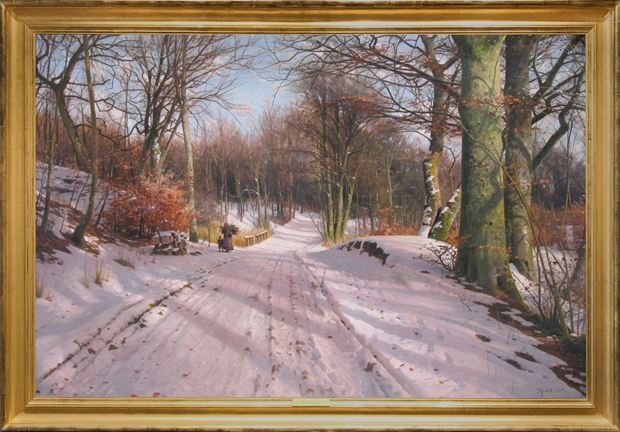 Fullscreen Print
In 1863 French art critic Jules-Antoine Castagnary offered the following definition of Naturalism, "The naturalist school declares that art is the expression of life under all phases and on all levels, and that its sole aim is to reproduce nature by carrying it to its maximum power and intensity..." Intensity is undoubtedly a fitting term to describe Mønsted's remarkable observational skill and ability to translate both the majesty and minutiae of the natural world to canvas. Close inspection of his often monumental pictures, reveal relatively broad brushstrokes rather than an overworked and minute application of paint; his technique is therefore to create an impression of detail. Mønsted had travelled extensively throughout Europe, and as far as Africa, but the outbreak of war saw him return to his native Denmark; the present work, executed in 1917 is therefore likely to be close to home. His treatment of the snow is marked by the myriad use of colour other than white, while every gnarl, leaf and branch of the beech wood is exquisitely rendered and celebrated. The scene is undoubtedly beautiful, but a strong sense of realism is retained by the inclusion of the elderly woman, the harsh, winter weather forcing her to carry a large bundle of firewood in spite of her advanced years.

Peder Mønsted was born in Balle Mölle, near Grenna in eastern Denmark on 10th December 1859. He studied at the Prince Ferdinand’s Drawing School, Aarhus where he studied under Andries Fritz (1828-1906), a landscape and portrait painter, before moving to Copenhagen. Here he studied at the Royal Academy of Art between 1875 and 1878, and was taught figure painting by Julius Exner (1825-1910). Here too he would have come across the work of artists such as Christen Kobke (1810-1848), an outstanding colourist and Peter Christian Skovgaard (1817-1875), a romantic nationalist painter, a knowledge of whose work is seen in the Danish landscapes and beech forests of Mønsted’s. As early as 1874, at the age of 15, he took part in the December Exhibition in Copenhagen. In 1878 Mønsted left the Academy to study under the artist Peder Severin Krøyer (1851-1909).

Mønsted travelled extensively throughout his long career, being a frequent visitor to Switzerland, Italy and North Africa. In 1883 Mønsted travelled to Paris where he worked with William-Adolphe Bouguereau (1825-1905) for four months. As early as 1884, he visited North Africa returning later in the decade. The early years of the 20th century saw Mønsted returning to Switzerland, the south of France and Italy, the latter being the source of inspiration for many Scandinavian artists of the 19th century. The war years curtailed Mønsted’s travel to Norway and Sweden, however the 1920’s and 1930’s saw him return to the Mediterranean. From 1879 to 1941 he exhibited regularly at the annual Charlottenborg Exhibition. Throughout his long career, Mønsted continued to paint the Danish landscape and coastline. His is a romantic, poetic view of nature; he was an artist who depicted the grandeur and monumental aspect of the landscape, with a remarkable eye for detail and colour. He was also known for a number of portraits, including that of King George I of Greece.

His works can be found in museums in: Aalborg and Bautzen. 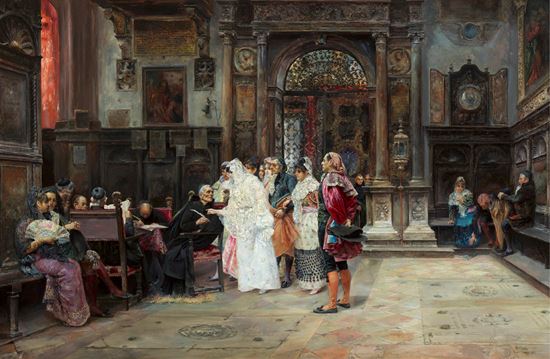 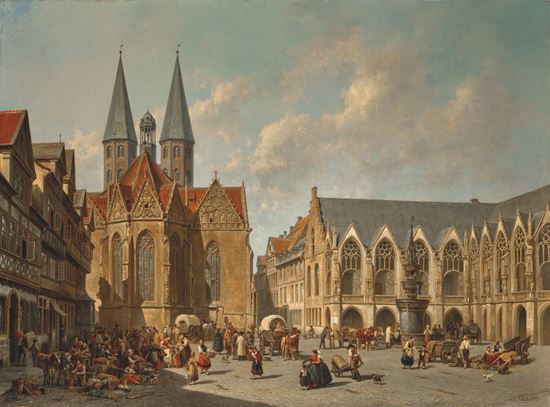 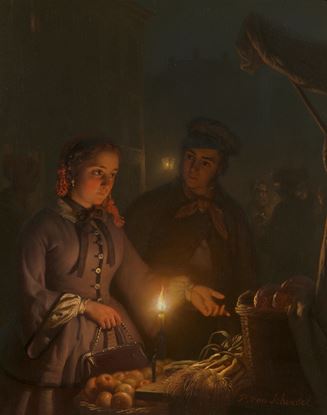