Thomas Miles Richardson was a renowned painter in oils and watercolour and a stalwart champion of the Arts in Newcastle.

Richardson was born in Newcastle, 15th May 1784, his father, George, was the Master of the St. Andrews Charity School in the city. He was apprenticed to a cabinet maker (1799-1806) but that year gave this up to replace his father as Master of St Andrews, in addition to becoming drawing master at the school.

In 1813, Richardson turned to painting, working in oils and watercolours, and etching as a full-time career. In 1816, he published a series of aquatints and a series ‘Scenes of Picturesque views of the county of Northumberland’, published with his brother Moses Aaron Richardson (1793- 1871). He produced further works, in 1822 ‘Northern Scenery’, in 1826 ‘Antiquities of Newcastle’ and in 1833-34 was commissioned for a series ‘Castles of the English and Scottish Borders’ which, like several of his projects, remained unfinished.

Richardson was a lifelong resident of Newcastle, living in Pilgrim Street in 1814 and subsequently at 53 Blackett Street. In 1822, he founded and organised the Exhibitions for the Northumberland Institute for Promotion of the Fine Arts, and in 1828 set up the Northern Academy of the Arts.

Richardson painted locally, his first exhibit at the Royal Academy in London 1814, being ‘A view of the old Fish Market, Newcastle’, and continued to paint views of the city and the coastline of Northumberland. He also worked further afield, on the Scottish Borders, the Lake District, and travelled to Switzerland and Italy.

He exhibited widely, in Newcastle, and at the Royal Academy in London, at the British Institution, Suffolk Street Galleries, the Old Watercolour Society, the New Watercolour Society, of which he was a member, exhibiting views of his city, Edinburgh and landscapes of Northumberland and the Borders.

Richardson had six sons, one of whom, Thomas Miles Richardson Jnr (1813-1890), was a distinguished watercolourist.

Richardson died in Newcastle in 1848. 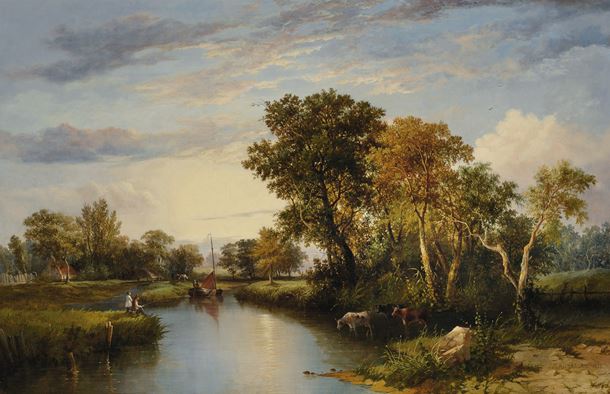