Wouterus Verschuur was born in Amsterdam, 11th June 1812. He studied as a pupil under Pieter Gerardus van Os (1776-1839) himself son of the still life painter Jan van Os (1744-1808). Pieter Gerardus was a painter of landscapes and rural subjects, horsemen and animals in rural settings and was to prove a significant influence on Verschuur. He also studied in Amsterdam under the younger Cornelis Steffelaar (1797-1861), a well-travelled landscape painter.

Verschuur was awarded the Felix Meritis Prize at a relatively young age and again in both 1831 and 1832 and was elected to the Amsterdam Academy in 1833 and to the Arti et Amicitiae Society in 1839. He travelled throughout the Low Countries working in the Hague and Doorn following the birth of Wouterus Verschuur Jnr in 1841 returning to Amsterdam 1846-1857. The family moved to Haarlem 1858-1868 interrupted by a brief sojourn in Brussels in 1867, returning to Amsterdam 1869-1874.

Verschuur also travelled to Hannover in Germany and to Brabant.

Between 1828 and 1872 he exhibited widely in Amsterdam and the Hague, in Leeuwarden between 1853-1863. Verschuur was a highly accomplished painter of landscape and rustic genre frequently featuring in equine subjects for which he was renowned. 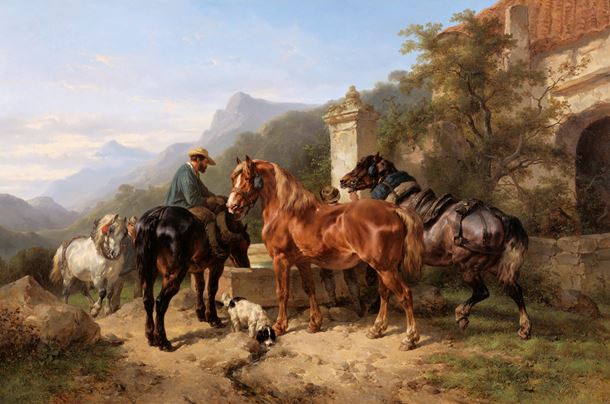