John Edward Newton was a Liverpool painter of landscapes, still life and figurative subjects heavily influenced by the works of ‘The Pre-Raphaelite Brotherhood’.

Newton lived in Liverpool 1856–1867, in Plimpton Street, moving to Seaforth and then to Litherland, just north of the city, the surroundings being a rich source of subject matter for the artist.

Along with his friend and fellow artist James Campbell (1828-1893), Newton was one of a number of Northern painters influenced by the meticulous style of the Pre-Raphaelites. Newton, with John William Inchbold (1830-1888) in Leeds were among the Northern landscape followers, along with fellow landscape painters John Samuel Raven (1829-1877) and William Davis (1812-1873).

Newton exhibited widely, at the Liverpool Academy, 1856-1867, local views and scenes in North Wales, and the landscape around Sefton and along the River Alt. He was also to exhibit similar subjects at the Royal Academy in London. In 1862, his first exhibit, was ‘Mill on the Allyn, Denbighshire’, now at the Walker Art Gallery, Liverpool, and in 1867 ‘A bit of nature near Sefton, Lancashire’, this latter work after he had moved to London the previous year.

In 1866, Newton, like James Campbell, moved south to London, living first in Kentish Town, before moving to Kensington and finally Kingston. His style moved away from the highly detailed work that had marked him out as a follower of the Pre-Raphaelites to a broader style of painting. Nesbitt painted and exhibited views of London, Putney and Hampstead featured at the Royal Academy in 1871, and he continued to exhibit there through to 1887, and at the Suffolk Street Galleries, the New Watercolour Society, the British Institution and at the Royal Institute of Painter in Watercolour, of which he was a member.

His works can be found in museums in: Liverpool, Walker Art Gallery.
Read more 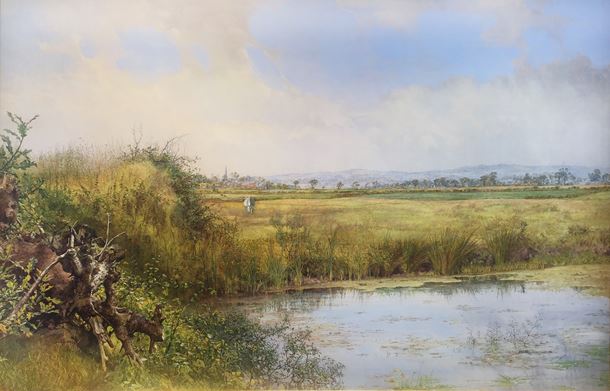