In 1850, Philippeau travelled to Italy and settled in Rome until his return to The Netherlands in 1855. Rome and its environs were to prove a fertile source of subject matter, and a significant influence on the artist throughout his career. Many of the artist’s paintings depict a Romanticised portrayal of life on the Roman campagna. While living in Rome, Philippeau continued to send paintings to be exhibited at The Hague, where he had exhibited from 1849, and to Amsterdam where he had first exhibited in 1848, and continued to do so until 1889.

On his return to Amsterdam in 1855, Philippeau was elected to the ‘Arti et Amicitiae’ Society.

Philippeau was a successful artist in his lifetime and has remained so, widely collected for his figurative works of family life in the Roman Campagna.

His works can be found in museums in: Glasgow; Manchester; Amsterdam; Brussels and Vienna.
Read more 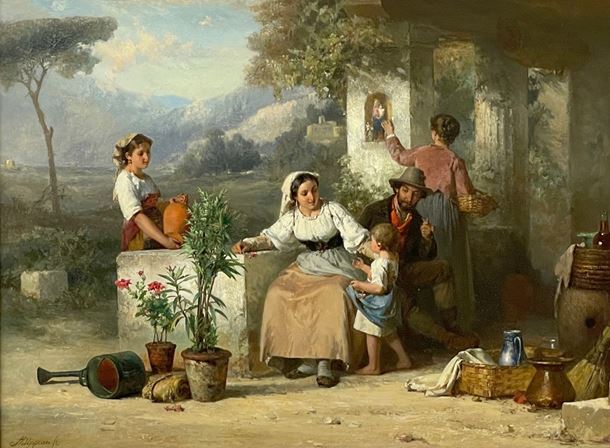