Giulio del Torre was born in Romans d’Isonzo, however, he did not remain all his life in the one city but travelled to and studied at the Academies of Vienna, Rome and Venice.

He mostly worked in oil paint on artist’s panel, and usually on a small scale, which best suited his highly refined style, and he quite often depicted a young boy and girl, of poor social status, selling oranges, or a book of matches, or even perhaps playing with a mouse.

Del Torre is best known for his portraits and genre paintings. He often painted children in endearing situations and his close attention to detail gave these characters a very life-like quality.

His subtle use of colouring within his pictures is a noted feature, although he often brightened up the painting with a dab of red or russet on the figures’ clothing, which also added variety. His work follows very much in the tradition of the earlier nineteenth century Italian figurative artists, and his contemporaries painting in the same tradition were Gaetano Chierici (1838-1920), Antonio Rotta (1828-1903) and Giuseppe Magni (1869-1956).

Towards the end of the nineteenth century, realism in painting was at its peak; the camera had to be beaten and Del Torre was amongst those whose obvious view for all intents and purposes was to do this. The artists had at their disposal a great advantage over the camera at that time, and that was the brilliant use of colour.

Although Del Torre’s pictures are not exhibited in his native Italy, they are now sought after by private collectors throughout the world. 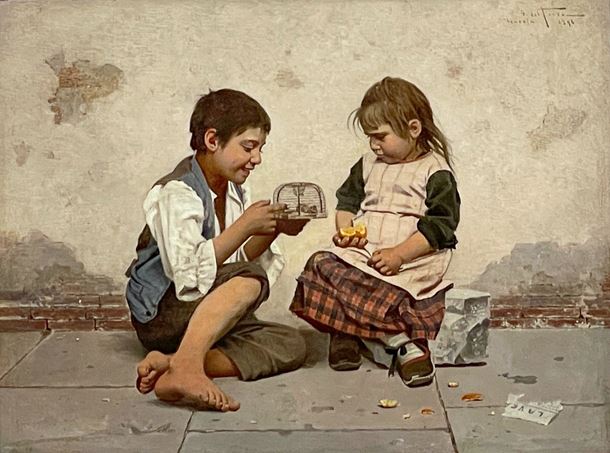