Pierre-August Renoir was born in Limoges 25th Feb 1841 one of five sons of a tailor of modest means. In search of work, the family moved to Paris in 1845 where in due course Renoir was to become apprenticed to a porcelain painter. The family lived in some poverty and Renoir also painted backcloths, murals and fans in order to earn money. He was able to enrol in the Ecole des Beaux-Arts where he studied in the atelier of Marc Gabriel Charles Gleyre 1808-74, the renowned painter of historical subjects. It was there that he came to know Alfred Sisley, Claude Monet and Jean Frédéric Bazille.

In the early years of his career Renoir admired Gustave Courbet, Jean-Baptiste Corot and Marcel Diaz de la Peña who in his youth was also a painter of porcelain. Renoir exhibited in first at the Paris Salon in 1864 but it was in 1868 with “Lise with a parasol” a portrait of his lover Lise Tréhot, that Renoir made an impression.

During the years before and during the Commune, Renoir would paint along the banks of the Seine near Paris with Claude Monet, developing the Impressionist palette and ideal. 1874 saw Renoir produce “La Loge”, perhaps his most important painting of the period (Samuel Courtauld Collection).

April 1874 saw the first Impressionist Exhibition with Monet, Sisley and Pissarro and Boudin amongst others, and Renoir went on to exhibit at four of the Impressionist Exhibitions between then and 1884. It was in this period that Renoir was assisted by wealthy patrons including the publisher Charpentier and gained a reputation as a portrait painter. 1879 saw his first one man exhibition at La Vie Moderne gallery, within the offices of the Charpentier publishing house. In 1881 Renoir travelled to Algiers, Madrid and to Italy where he was inspired by the works of Raphael and the frescoes of Pompeii.

Renoir’s style developed in the 1880’s, he worked with Cezanne in Provence moving away from Impressionism and towards a more detailed style, it was a period when he spent much more time on drawing, and became an admirer of Ingres.

Renoir continued to paint portraits and but rather than the pretty society portraits of the 1870’s he was drawn to more everyday subjects, painting his children, particularly Coco, and their nurse Gabrielle.

Renoir spent much of his time from 1900 in Provence in the winter and summer in Essoyes, settling in Cagnes-sur-Mer.

Landscapes continued to be a favoured subject, although his palette had changed from his views in Guernsey in 1883 to warmer colours, hues more reflective of the heat of Provence. Renoir died in Cagnes-sur-Mer on the 17th December 1919.

His works are hung in every major museum and gallery worldwide including those in London, Paris, New York, Berlin, Moscow, Vienna, Stockholm and Chicago. 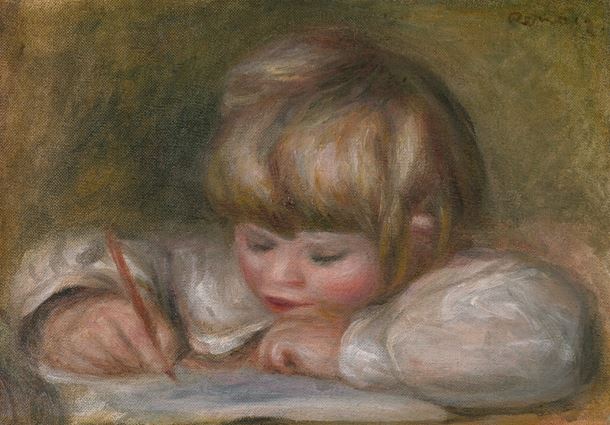