Born in Bristol, James Hardy Jnr. was a landscape painter in oils and watercolour who specialised in rustic sporting genre. He was from a well known family of artists, his father James Hardy Snr (1801-1879) was a landscape painter, his brothers David and Heywood Hardy, A.R.W.S., R.P., R.E., R.W.A. (1842-1933) were also painters, the latter renowned for his equestrian subjects, and his cousin Frederick Daniel Hardy (1826-1911), a painter of interiors, was a member of the Cranbrook Colony in Kent. Hardy’s interest lay not in the depiction of hunting itself but in the dogs, typically Setters and Retrievers guarding the day’s bag, or a gillie returning from the hills with a stag, or perhaps even a scene of dead game, rabbits and a brace of mallard by a stile. Such scenes, particularly the romanticism of the Scottish Highlands, had seized the Victorian imagination; Queen Victoria’s admiration for the Highland subjects of Sir Edwin Landseer (1802-1873) and Richard Ansdell, R.A. (1815-1885), and their wide dissemination through engravings, had done much to popularise these hunting scenes. Hardy too reaped the rewards of this popularity, his paintings are those of a countryman depicting rustic sport, an artist with a close affinity for his dogs, he excelled at their portrayal, depicting their alertness and yet their patience.

Hardy travelled extensively in England and Scotland, proving highly successful in both oil and watercolour. He died in Finchley in 1889.

His works can be found in museums in: The Victoria and Albert Museum, London; Cardiff.
Read more 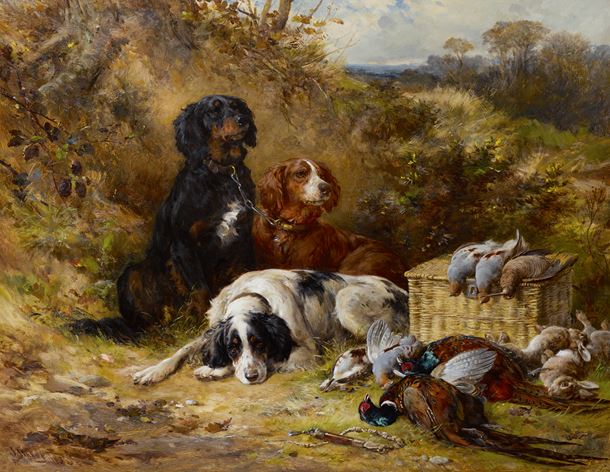