From inauspicious beginnings Emile Claus was to become renowned as the foremost Belgian Impressionist painter in addition to being that country’s best known painter of landscapes.

He was born in the village of Vive-Saint-Eloi in 1849. His father was utterly resistant to the idea of his son becoming a painter and apprenticed Emile to a bakery in Lille. This was followed with a burgeoning career as a supervisor on the railway and then a job as a shop worker. It was at this point and with some assistance from a benefactor that Claus finally defied his father and turned to painting, enrolling at the Academy of Fine Arts in Antwerp. Here he studied under the professor of landscape Jacob Jacobs (1812-1879) and the director Nicaise de Keyser (1813-1887), a painter of portraits and historical subjects. Claus’s compositions tended towards realism, a trend that was counter to the traditional classicism of de Keyser and led to his initial renown as a painter of landscapes influenced by the social realism of Jules Bastien-Lepage (1848-1884). His works of 1883 La Récolte du Lin and Le Bateau qui passe confirmed this rapidly elevated status.

This same year of 1883 Claus moved to Astene where he remained for the rest of his life apart from his sojourn in London during the First World War 1914-18.

Claus travelled widely visiting Holland, Italy, Spain and Morocco. He worked in Ghent, Antwerp and Paris and in Paris came under the influence of the French Impressionists, in particular Claude Monet (1840-1926). Claus was a founder of the Luminist School, and a hugely influential artist in his native Belgium. From social realism he progressed through Luminism to Impressionism, these latter works characterised by his ability to capture mood and atmosphere, the rays of sunshine playing over water, mist arising from a meadow. The period 1914-18 saw Claus perforce working in London producing memorable views of Waterloo Bridge (Brussels) or The Thames, London (Ghent). Following the war Claus returned to Astene where he lived and worked until his death in 1924.

Claus exhibited extensively in Belgium and was a frequent exhibitor in Paris. 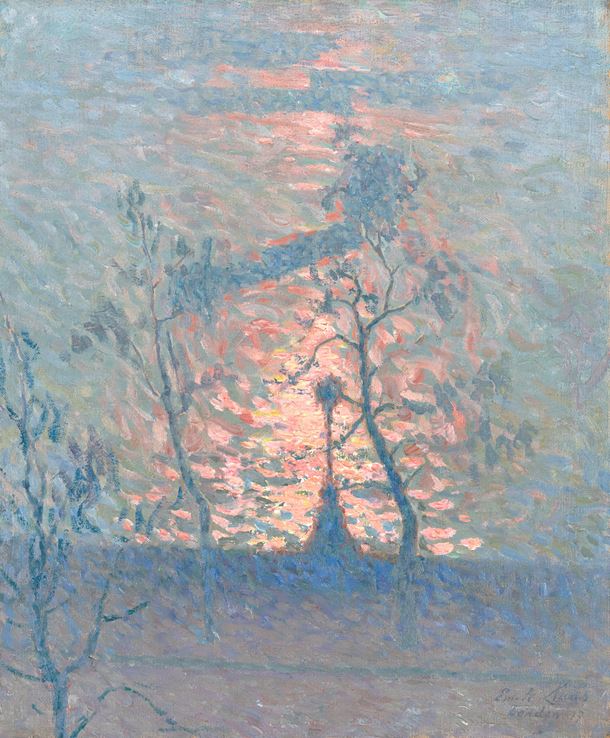 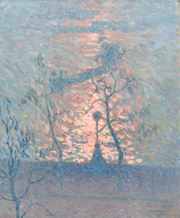