Elisabeth Frink was born in Thurlow, Suffolk on 14th November 1930. She began her studies at the Guildford School of Art in 1946 where she was tutored by Willi Soukop, RA (1907-1995) whose work and teaching would prove to be one of her greatest influences. She furthered her studies at The Chelsea School of Art and, following her graduation in 1953, became associated with an emerging group of British sculptors named the Geometry of Fear School. The group included Reg Butler (1913-1981), Bernard Meadows (1915-2005), Kenneth Armitage, CBE (1916-2002) and Sir Eduardo Paolozzi, KBE, RA (1924-2005) whose powerful work in bronze reflected the resounding agony of war, the loneliness of existence and the pervasive climate of fear in the nuclear age.

Frink’s idiosyncratic method of sculpting echoed these themes and involved working plaster into an armature, resulting in a broken, almost scarred finish. Religious motifs, men and animals, particularly birds, dogs and horses provided her early subject matter. She lived in France for much of the 1960s and it was during this period that she produced a number of large male busts, often with polished bronze shades, that became known as ‘the goggled heads’. These imposing works brilliantly convey the dichotomy of the aggressor, the shaded eyes displaying superficial strength yet revealing internal weakness. On her return to England she developed this further, producing life-size bronzes such as “Running Man” (1976); part caveman, part robot these defining bronzes capture both the potential and limitation of man in a rapidly evolving world. Unlike many of her contemporaries Frink resisted the lure of abstraction, sticking to figurative ideals. She was fascinated by the nature of man as well as nature as a whole and explored this relationship with her famed horse and rider series where man and beast fuse almost into one being.

Frink’s achievement was officially recognised with a CBE in 1969, in 1977 she was elected a member of the Royal Academy and was made a Dame in 1982. By this stage in her career she could barely keep up with demand; a catalogue raisonné was produced in 1982 as well as a retrospective at the Royal Academy in 1985. Her work ethic was extraordinary, while producing numerous private and public commissions; she also served on various advisory committees, was a committed member of Amnesty International and actively engaged with fellow artists and members of the public who admired her work.

In 1991 she was diagnosed with cancer of the oesophagus but returned to the studio soon after surgery. A further operation was undertaken later that year and despite a deteriorating condition, she returned to work, producing sculpture for exhibitions in New Orleans and New York as well as accepting a commission of a monumental statue for Liverpool Metropolitan Cathedral; Risen Christ was installed just one week prior to her death in April 1993, aged sixty-two.

Her works can be found in museums in: Derbyshire, Chatsworth House; London; Warwickshire, Jerwood Sculpture Park at Ragley Hall and Ontario, The Windsor Sculpture Park. 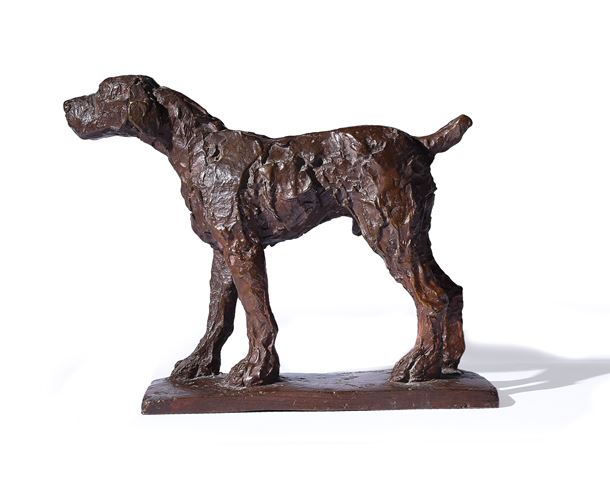