Born in London in 1821, Sidney Richard Williams took the last name Percy to distinguish himself from his five bothers and his father, all themselves painters. Percy lived for many years, as did a number of his brothers, in Barnes before marrying Emily Fairlawn and subsequently moving to Wimbledon.

A quiet and diffident man, as described by William Callow, and a prosperous and successful artist, Percy moved to a country house in Great Missenden in 1863, aspiring to the lifestyle of a country gentleman, later moving to Redhill and Sutton, where he died following a horse riding fall. Percy was a highly successful landscape painter, his earlier works showing the influence of his older brother Henry John Boddington (1811-1865). However, after painting in Devon and the South, Percy took to visiting the Lake District and North Wales and later in life, Scotland. There existed a huge demand throughout the 19th century for paintings of wild uncultivated mountainous landscapes, nature, as it were, in the raw. Percy would include figures, frequently based on photographs of local children or gypsies, to emphasise the majesty and grandeur of the landscape. He was the most successful of the Williams brother.

His works can be found in museums in: London, Royal Collection of H.M. the Queen, Tate Gallery; Cardiff, National Museum of Wales; Leeds; Hull and Sheffield. 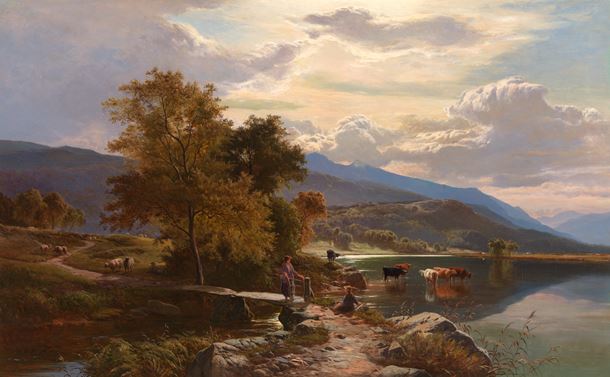