“Here was a great artist who never ceased working. She possessed the energy of six…Laura Knight could paint anything, be it a small watercolour or a nine foot canvas” so said Sir Alfred J. Munnings (1879-1959) in his autobiography. Laura Knight, née Johnson, was born in Long Eaton, Derbyshire, the family soon moving to Nottingham where she studied at the Nottingham School of Art from the age of thirteen. Here she met Harold Knight (1874-1961) with whom she worked in Nottingham and Staithes in Yorkshire.

Staithes, a fishing village, home to a flourishing colony of artists, provided material for the ‘plein air’ social realism to which Knight would have been exposed at Nottingham. 1907 saw Laura and Harold Knight marry and move to Newlyn, home to Stanhope Forbes’ artist’s colony. Here the Knights joined Lamorna Birch (1869-1955), Harold (1874-1941) and Gertrude Harvey, Ernest Proctor and later, Sir Alfred Munnings. These Lamorna years, 1907-1918, saw a change in Laura Knight’s palette, from the sombre monochromatic tones of The Hague School, to a sunlit clarity full of colour, years when she produced some of her best works in oils and watercolours.

Following the Great War, the Knights moved to London. Laura continued to exhibit Cornish views throughout the 1920’s. Her abiding interest in the ballet and theatre however, grew, having sketched backstage at Diaghalev’s ballet company, Knight turned more to ballet, theatre and the circus. During the Second World War, Knight painted as a war artist e.g. “A Balloon Site” of 1943 or “Bomber Construction” of 1944 and these industrial subjects and landscapes continued through the 1940’s. Her later career saw her return to theatrical subjects although her love of landscape and rural country life for which she always retained a fondness is reflected in her later Royal Academy exhibits.

Her works can be found in museums in: Brisbane; Detroit; Hull; Johannesburg; Leicester; London, Imperial War Museum; Ottawa and Preston. 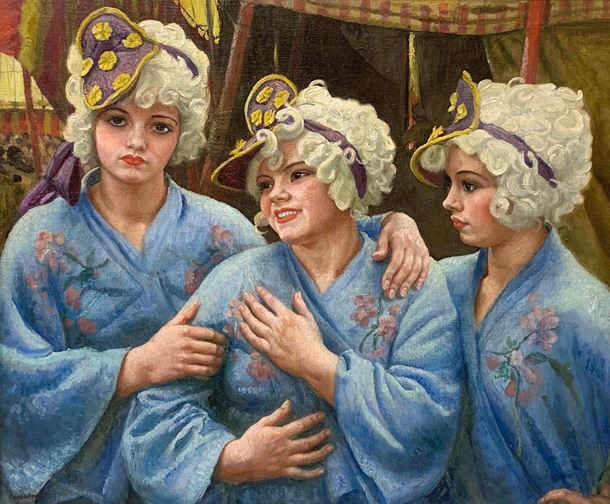