Luigi Loir, christened Aloys François Joseph Loir, was born in Goritz, Austria, of French parents. Precociously, at the age of eight, Loir was studying at the l’Ecole des Beaux-Arts in Parma before in 1863 moving to Paris. Here he studied with Jean Pastelot (1830-1870) a painter of decorative scenes who exhibited at the Salon between 1846-1870.

Luigi Loir made his debut at the Paris Salon in 1865, with a work titled “Landscape at Villiers sur Seine”, which was well received in part owing to his youthful age of twenty years. Despite this early recognition, he continued to work as a decorative painter, in the manner of Pastelot, most notably on the décor of the Chateau du Diable in 1866. Loir served with distinction at the Battle of Bourget 1870, in the Franco Prussian War. Following the war Loir concentrated exclusively on painting views of Paris for which he became renowned. His paintings record the newly reconstructed streets and boulevards of Baron Haussmann at all hours of the day and in all weather, sunlit parks and rain sodden streets by night with café lights glowing. Loir created a genre, which many artists were to follow.

Loir exhibited at the Artistes Français being awarded medals in 1879 and in 1889, the Universal Exposition. In 1898 he was awarded the Legion d’Honneur. 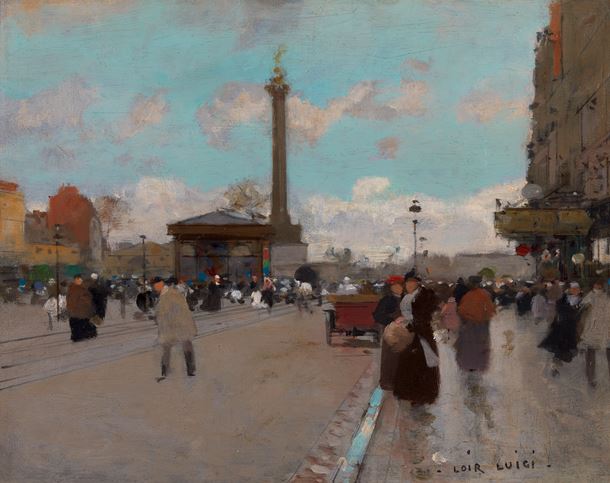