Throughout the eighteenth century history painting, in England and France, was considered the highest form of art. The first half of the nineteenth century saw the rise of the historical novel, through the writings of Walter Scott (1771-1832), disseminated throughout Europe. In France this new vogue was exemplified by the plays and novels of authors like Alexander Dumas (1802-1870) with his “Henry III” or “The Three Musketeers”.

In the mid-nineteenth century in England this widespread interest was continued by the Pre-Raphaelite Brotherhood and their highly romanticised view of the past. This interest in the past led to the development of a new genre of history painting. Foremost in this genre was Jean-Louis-Ernest Meissonier (1815-1891) who’s meticulously researched and detailed compositions of an idealised view of the past paved the way for the likes of Adolphe Alexandre Lesrel. Lesrel was greatly influenced by Meissonier, an artist whose popularity extended throughout Europe and the United States; Lesrel adopted his highly detailed and finished style. Costume, gowns, objets d’art, furniture, all were researched to ensure the historical accuracy of his work.

Lesrel exhibited at the Societaire des Artistes Français in 1885, and in 1889 received an honourable mention. In 1890 he became an Associate of the Salon Nationale des Beaux-Arts. Lesrel’s historical scenes, an idealised and romantic interpretation, found a ready market in France, England and the United States. This popularity has remained unchecked; in 1920 Lesrel’s “Jeu d’Eches” sold for £115 and in 1946 for £1,029. The subject matter and technical virtuosity of his brushwork ensures his continuing popularity.

His works can be found in museums in: Digne; Nantes; Rouen; Saint-Lo; New York and Sydney. 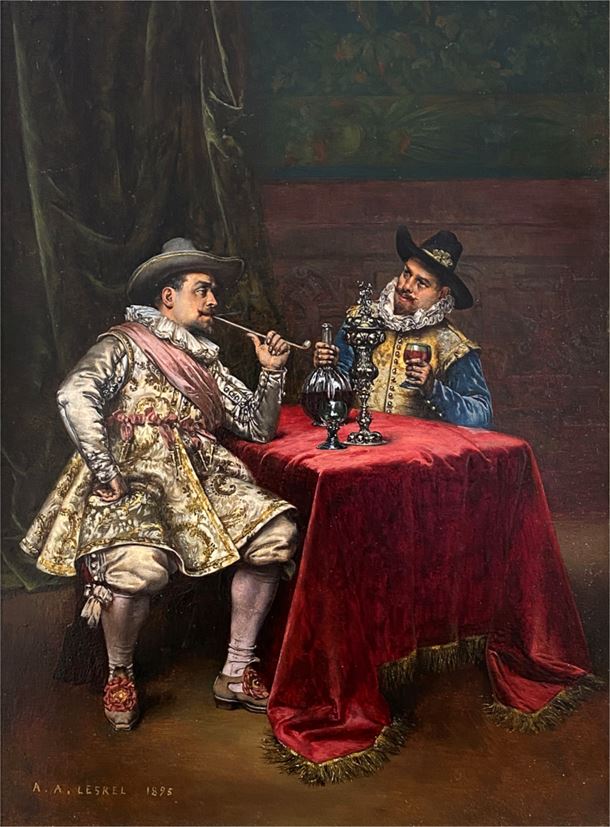 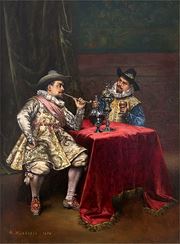