Alexei Harlamoff was born in Dyachevka, nr Saratov in 1840. He enrolled as a student at the Academy of Fine Arts in St. Petersburg where he was awarded a gold medal before continuing his studies in Paris. It was here under the influence of Léon-Joseph Florentin Bonnat (1834-1923), a Professor in the Ecole des Beaux-Arts with whom he studied that Harlamoff developed his very particular style.

Bonnat, born in Bayonne on the Spanish border, had studied in Spain and subsequently Italy, and was in his early years considered to be of the Spanish School. He returned to Paris and rapidly developed a significant reputation as a portrait painter in addition to producing the academic, historical and biblical scenes expected of such a highly regarded artist.

Harlamoff too was quickly to be seen as a portrait painter of note, commissioned to portray such important figures as Ivan Tourgueneff, Tsar Alexander II and Prince Davidoff in addition to society figures like Pauline Viardot-Garcia. However, although successful in his commissioned portraiture Harlamoff is perhaps best known for his genre subjects featuring young girls, he frequently used his daughter as a model, wearing Italian or Bohemian costumes. These works, whether a single figure or a group of children are imbued with a gentle innocence and sentiment that few artists have achieved. There is both a subtlety of colouring and an intangible quality, which lends itself to portraying the detail and softness seen in the artist’s brushwork. Harlamoff’s style is unmistakably Russian but leavened by his period in France and his exposure to the cosmopolitan influences of Leon Bonnat. Harlamoff’s work was included in the Universal Exposition of 1900 in Paris, significantly in the Russian Section.

His works can be found in museums in: Leningrad, Russian Museum; Moscow, Brobinski Collection, The Tretyakov Gallery and St. Petersburg, the Alexander III Russian Museum. 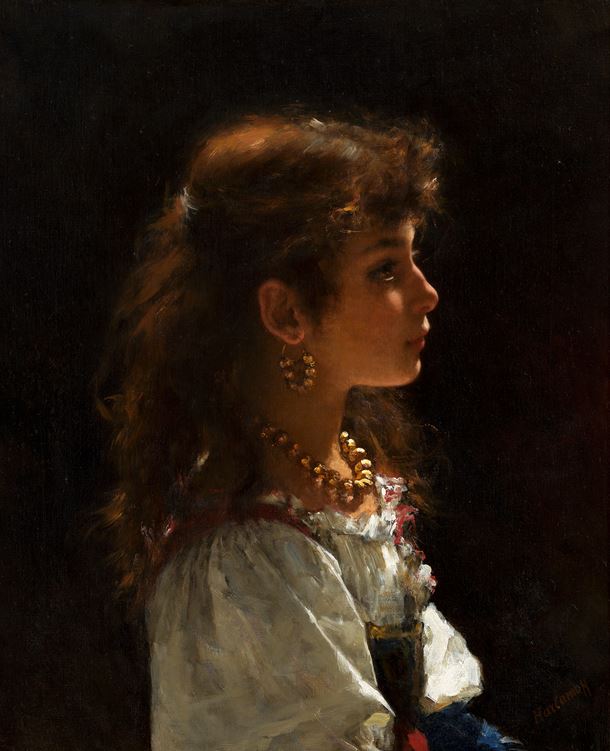 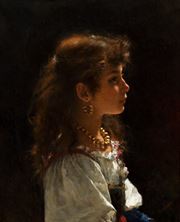