Ivan Fedorovich Choultsé was born in St. Petersburg in 1877. He studied in the city with Constantin Krighitzky (1858-1911) a painter of landscapes and marines who was to prove highly influential on his young pupil. Krighitzky exhibited in Paris at the Universal Exposition in 1889 and 1900 and it was to Paris that Choultsé fled following the revolution and civil war in Russia.

Choultsé had already established a reputation for his paintings of winter, the glow of setting sun on a wooded river landscape under a mantle of snow was a subject at which he excelled. Choultsé, like so many of his compatriots lived and worked in Paris in the 1920’s. Choultsé, however, in addition to painting in Paris itself, scenes in the Bois de Boulogne and in the environs, the gardens of Versailles, also travelled widely.

Choultsé worked in the south of France, based in Montreux, he was particularly interested in the effect of light, sunlight and moonlight over water and in contrast he also worked in Switzerland, notably in the Engadine valley, and it is for both subjects, river landscapes in winter and sunset and moonrise over the sea that he was renowned. Choultsé exhibited in Paris at the Salon des Artistes Francais (1923-4) and was widely collected, particularly in Russia, France, Great Britain and the United States.

His work can be found in a museum in: Washington DC, Hillwood Museum. 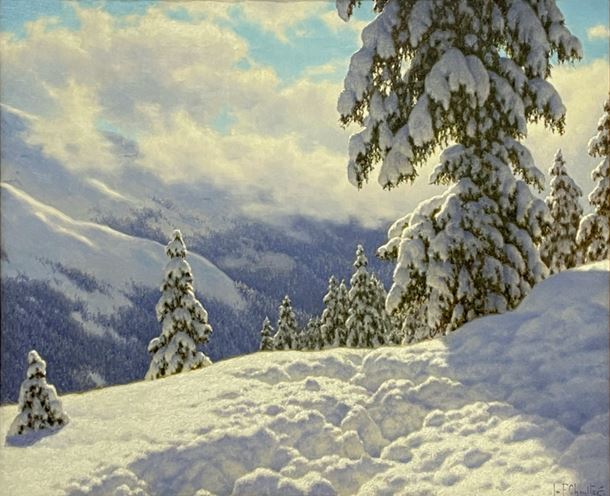