Luis Álvarez Català was born in Helmo, in the province of Orviedo in 1836. He studied from an early age in Madrid, at the Studio of Frederigo de Madrazo (1815-1894). Madrazo a painter of historical genre, immensely popular in Spain and in Paris was both Director of the National Museum in Madrid and Director of the School of Painting. His influence on the young pupil was to be lasting. At the age of 16 in 1852, Álvarez moved to Rome. Rome had been a destination for artists throughout Europe over the centuries; the second half of the 19th century saw a particularly successful colony of Spanish painters, of whom Luis Alvarez was one of the foremost, specialising in works of historical genre and scenes of everyday life in Rome. Contemporaries included Francesco Domingo Marques (1842-1920), José Jiménez y Aranda (1837-1903) and a younger generation who followed included Vicente March y Marco (1859-1914) and José Garcia y Ramos (1852-1912).

Luis Álvarez paintings were extraordinarily popular, for the subject matter, elegant scenes set in eighteenth century costumes and for the rich colours and highly finished technique. He sent his paintings to be shown at the principal exhibitions throughout Europe, being awarded medals in Madrid in 1862, 1864 and 1890, and in Munich, Berlin and Paris also in 1890. His paintings were not only sought after in Europe but were also of appeal to collectors in North and South America.

Later in his career Álvarez had returned to Madrid where he became Director of the Prado Museum. He died in 1901.

His works can be found in museums in: Berlin and Madrid. 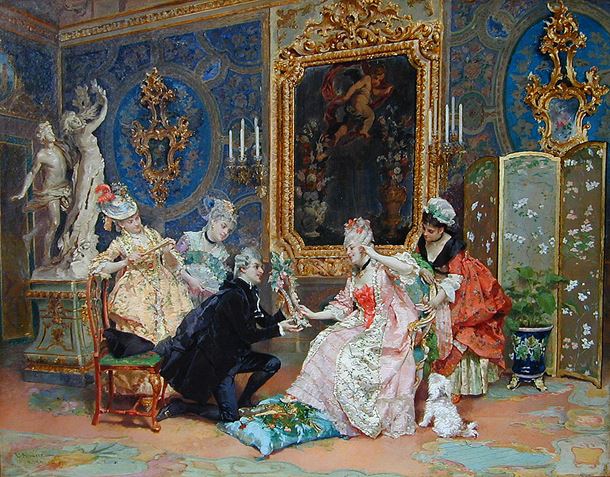 “Dressing for the Ball”