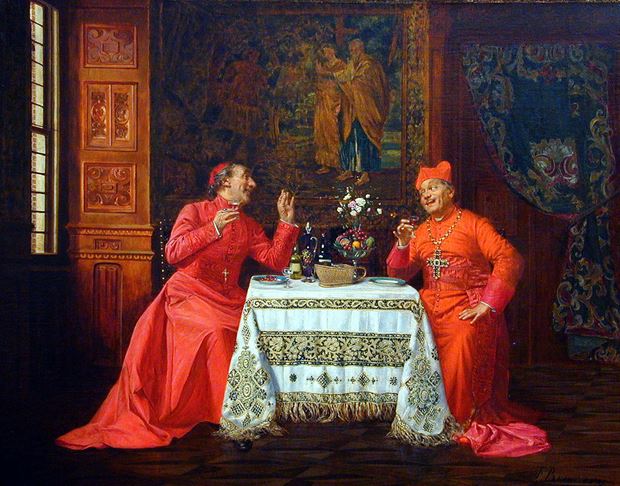 François Brunery studied in Paris under Jean-Léon Gérôme (1824-1904) and Léon Joseph Bonnat (1834-1923), the former the renowned Orientalist and the latter a leading academic painter of the era.

Brunery then trod the well-worn path to Rome, the destination for generations of painters following their formal training in Paris, where he would have embarked on history painting and a study of the masters. Legend has it, that it was following one encounter too many with one of his models, that Brunery and his wife returned to Paris.

His earliest exhibited works at the Paris Salon included a portrait in 1880 and Venetian canal views the following years. It was in the 1890’s that he rapidly forged a reputation as the leading artist in a specific genre of Cardinal paintings; his rivals Andrea Landini (b.1847), Jean George Vibert (1840-1902) and Georges Croegaert (1848-1923) all being exact contemporaries, and, it is no coincidence, all from Catholic countries. The last decades of the 19th century saw economic prosperity on a previously unknown scale in Europe and the United States. The burgeoning middle-class, the growth of mammon and with it perhaps a lessening in regard for the church, saw this genre of cardinal painting surge in popularity. The highly finished technique, the vivid purples and crimsons, the wealth of lavish detail and above all, the pointed humour proved to be of enormous appeal, and François Brunery was the leading exponent.

Brunery exhibited at the Paris Salon from 1880 and received an honourable mention in 1903.