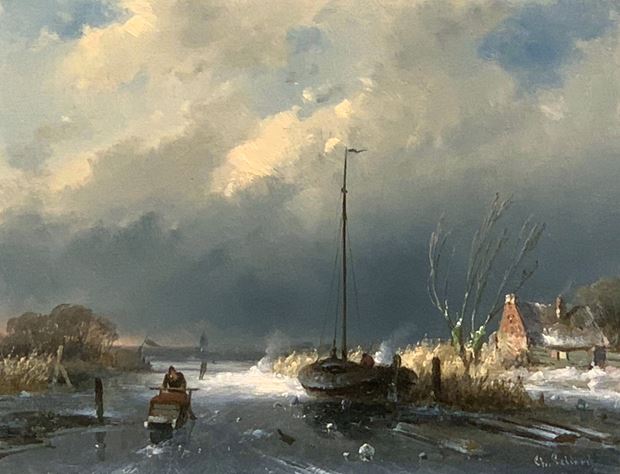 Although born in Brussels, what was to become the capital city of Belgium, on 22nd September 1816, Charles Henri Joseph Leickert can rightly be considered an artist of the Dutch School. He studied in The Hague under Bartholomaus Johannes van Hove (1790-1880) the painter of town scenes, Wynand Jan Joseph Nuyen (1813-1839) and also in The Hague with Andreas Schelfhout (1787-1870), who was to have such a significant and lasting influence. Leickert was predominantly a painter of landscapes, bucolic summer river scenes, town scenes, but above all he is renowned for his winter landscapes in the true Romantic tradition. He continued to work in The Hague to 1848, the year in which he was elected to the Arti et Amicitiae Society in Amsterdam. The following year Leickert moved to Amsterdam and is recorded as collaborating with Charles Rochussen (1824-1894) a fellow pupil of Nuyen’s in The Hague; Leickert also painted with Joseph Josse Jodocus Moerenhout (1801-1875), an artist who he may have met through Schelfhout with whom Moerenhout also collaborated, an indication of the close-knit and amicable nature of artistic circles.

In 1861 Leickert was elected to the Academy of Fine Arts in Amsterdam and yet, this same year, moved briefly to Mainz am Rhein, returning to The Hague the following year. Leickert then moved to Amsterdam, living in Nieuwer-Amstel before returning once again to Mainz where he died on 5th December 1907. Leickert painted a number of views on the Rhine, romantic river landscapes for a German market.

Leickert exhibited in Amsterdam and The Hague 1841-1887 and at Leeuwarden 1855-1863. He was a highly successful and prolific artist in a career that spanned well over half a century; a painter of winter landscapes and a true Dutch Romantic.

His works can be found in museums in: Amsterdam; Delft; The Hague; Maastricht; Rotterdam; Utrecht and Mainz. 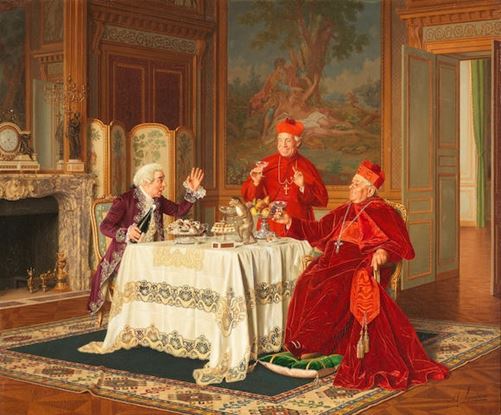