Otto Didrik Ottesen became a pupil of J G Berg in Denmark’s capital Copenhagen where he also managed to secure a place at the Academy of Arts where he remained until 1843.

In painting still life, many direct parallels can be drawn with the work of fellow Dane and contemporary Johan-Laurents Jensen (1800-1856) another pupil of the Copenhagen Academy who specialised in the painting of fruits and flowers. Like Jensen whose style was derived from painting on porcelain, Ottesen sought these same refined qualities even when painting on a wood panel and indeed on a canvas, the result of which was a realism distinctly unique to the Danes. In 1866 he became a member of the Academy and later rose to be a Professor responsible for teaching there in 1874.

Like Jan Van Kessel (1626-1679) in Holland and Gerard Van Spaendonck (1746-1822) in France, Ottesen painted with great intensity of detail employing often the typical dark and shaded backgrounds to set the vibrant and varied colours of the flowers off by way of contrast. Dew drops and insects would adorn the arrangements almost as trompe l’oeil and his signature was always discreetly placed.

Ottesen did not tend to paint large pictures and due to their clarity and detail he was not a prolific artist, though seven of his paintings depicting fruits and flowers can be seen in the Museum of Copenhagen. 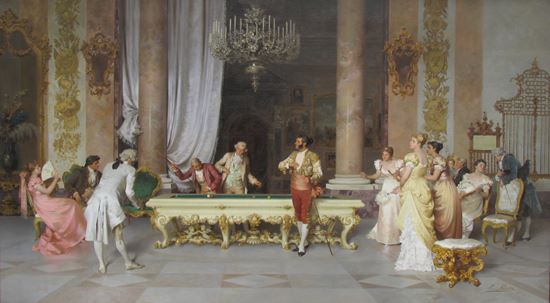