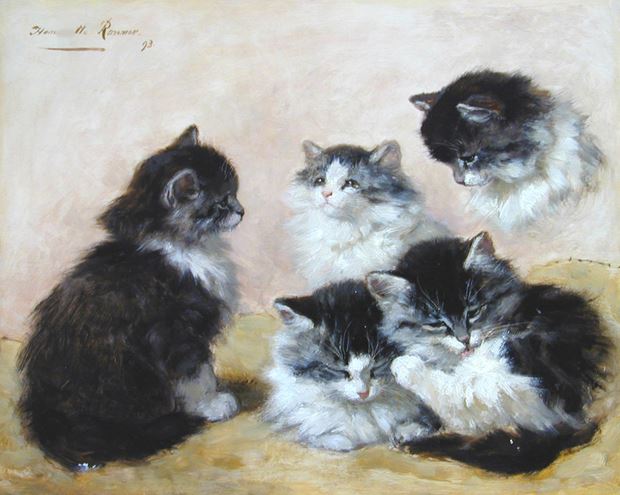 Henriette Ronner was born in Amsterdam on 31st May 1821, the third generation of a family of painters. Her father, Josephus Augustus Knip (1777-1847) who had studied with his father N F Knip, was a painter of landscape and animals who travelled extensively. At an early age Henriette had lived in Paris and Rome, and extant drawings of animals and Roman views show her precocious talent. She studied with her father and in her early years painted landscapes and animals in a similar manner, producing co-operative works on occasions.

She exhibited in The Hague and Amsterdam from 1838. Following her father’s death, in 1850 she met and married Feico Ronner (1819-83) moving to Brussels where she was to live for the rest of her life.

Gradually the painting of domestic pets, principally cats and dogs began to dominate Ronner’s output. From paintings of cats prowling in barns and anecdotal works of dogs as guardians, hauling dog carts and unabashed sentimental portrayals, Ronner began to produce compositions of cats and kittens in domestic interiors. These subjects were of enormous appeal to the wealthy bourgeois, a rapidly growing class fuelled by the industrialisation taking place throughout Europe.

Ronner exhibited widely, in 1862 she was elected a member of the Academy in Rotterdam, she exhibited in Brussels and continued to exhibit in The Hague and Amsterdam to 1895, being awarded a gold medal by the Arte et Amicitiae in Amsterdam in 1874. She exhibited widely in France, at Dijon, Rouen, Nancy and Le Havre, in 1876 in Philadelphia and in 1879 and 1883 was awarded a gold medal in Antwerp. In 1886 she received a silver medal in Edinburgh and exhibited at the Royal Academy, London 1891-1903, indicative of her popularity in Great Britain. In 1887 Ronner was awarded the order of Leopold in Belgium.

Henriette Ronner is universally acknowledged as the painter of cats above all others, enormously popular in her lifetime and widely collected throughout the 20th century in Europe and the United States.

Her works can be found in museums in: Stirling; Amsterdam; Avignon; Dijon; Dordrecht; ’s-Gravenhage; Haarlem and Rotterdam. 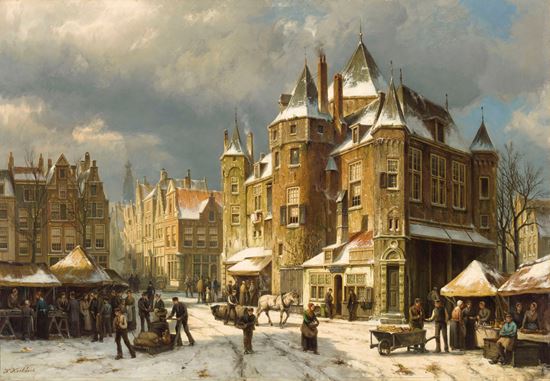 The Nieuwmarkt in Amsterdam in winter